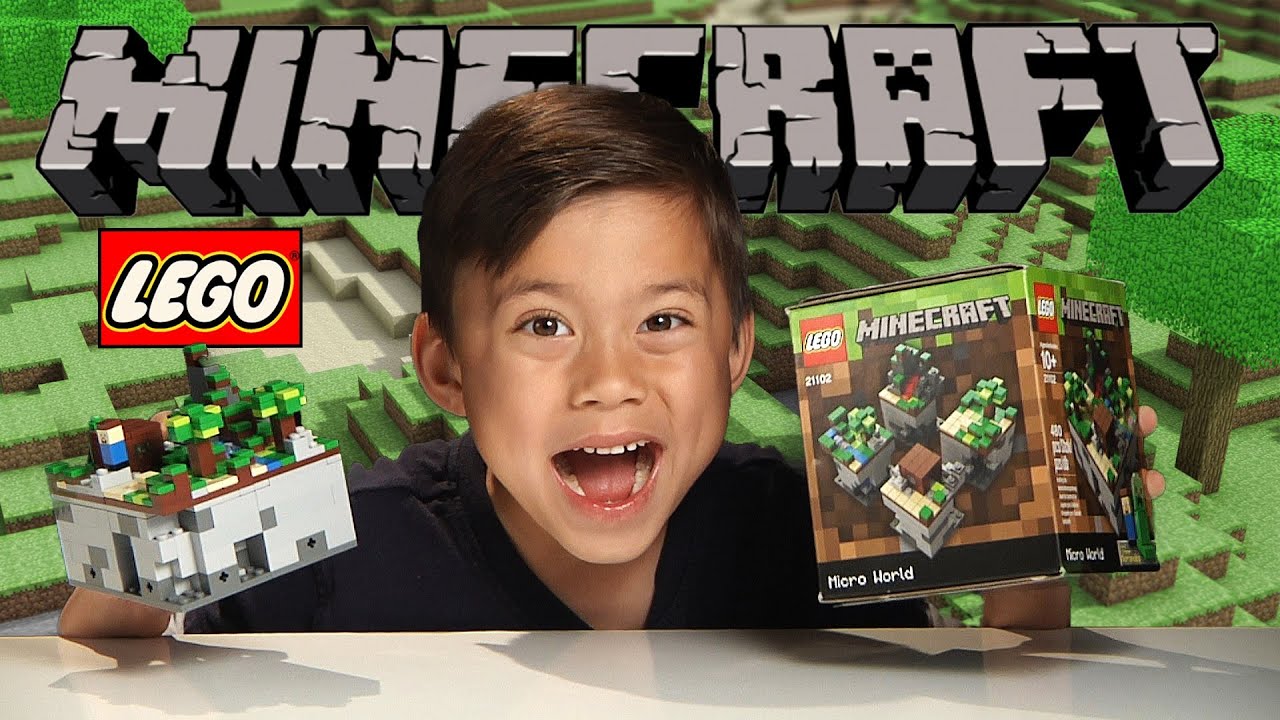 LEGO MINECRAFT minifigure-scale sets:
THE FIRST NIGHT:
THE FARM:
THE MINE:
CRAFTING BOX:
THE CAVE:
THE ENDER DRAGON:
THE DESERT OUTPOST:
THE NETHER FORTRESS:
THE DUNGEON:

LEGO Minecraft micro sets:
THE END:
THE FOREST:
THE VILLAGE:
THE NETHER:

We were lucky enough to get our hands on a hard to find Lego MINECRAFT MICRO WORLD Set. It is sold out in many online sellers and not carried in many toy stores. It was created due to high demand from members at LEGO CUUSOO.

The set contains 480 very small pieces and is recommended for ages 10+. But Evan proves that a 7 year old is capable of building this set. The micro mob Steve and Creeper aren’t exactly to scale. But this set will still be a big hit with any MINECRAFT fan!

“LEGO Minecraft Micro World is designed to celebrate the essence of the LEGO concept and the Minecraft gaming experience,” said Paal Smith-Meyer, Head of the LEGO New Business Group. Each set features four cubic modular vignettes that can be connected to recreate the Minecraft experience in LEGO bricks. One Minecraft block is represented as one 1×1 LEGO plate with a tile on top – not a perfect cube, but the best approximation at the chosen scale.

LEGO Minecraft Micro World includes two of Minecraft’s most iconic characters, Steve and a Creeper, represented as “Micro Mobs.” The model presents a standard for building a Minecraft world that can be configured any way the builder likes.

The surface of the modules comes off to reveal mines and hidden resources beneath. Fans can build their own landscapes, stack cubes on top of each other, to build the world of Minecraft as they wish.

The product was developed in collaboration with four LEGO fans: Chris Malloy, Michael Thomas, Kyle Tingey, and Bjarne Panduro Tveskov. These fans developed concepts alongside LEGO designers and helped shape the product into its final version.

LEGO CUUSOO is a website where LEGO fans can submit their ideas for new LEGO products and collect votes to make their ideas become a reality. They can also vote for other users’ ideas. It can be found at

Ideas that are supported by 10,000 votes have a chance of being selected to become part of the LEGO Group’s product portfolio. Consumers who have their ideas chosen will earn 1% of the total net sales of the product.

Mojang will donate the 1% proceeds from LEGO CUUSOO to charity.

For more on the co-creation process for LEGO Minecraft Micro World, see the LEGO CUUSOO blog at